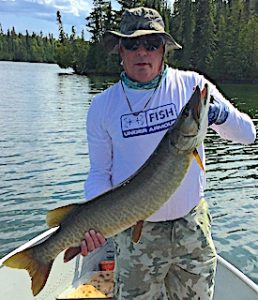 Weather this week was text book August temperatures being in the low 70’s or high 60’s for daytime highs, and lows of 45 to the low 50’s at night. We had a few windy days and a cold front however fishing seemed to be stimulated by these changing conditions as you wills see and read below. 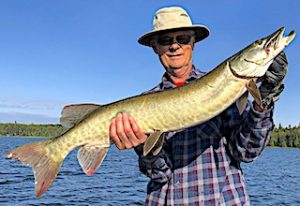 Muskie Fishing is Terrific at Fireside Lodge in Canada by Al

Al Sins and Don Funderude from Asheville, NC returned with us at Fireside Lodge for Al’s 19th time. Their main objective was to catch Muskie, as they have always been successful doing. Day of arrival Al did not waste any time raising a Muskie on his third cast. 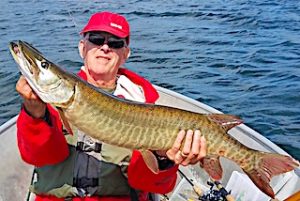 1st day fishing had them catching some Northern Pike and having some Muskie follows. 2nd day was a good day Muskie fishing with them having 15-20 follows, and Al caught two Muskie the largest was a heavy 35-inch fish and Al also had a monster hooked and lost it when the Musky completely leaped out of the water by at least a foot, and at the same time spit Al’s lure back to him almost like the fish was saying “back at ya”. Don and Al estimated the fish to be between 42 and 45–inches. 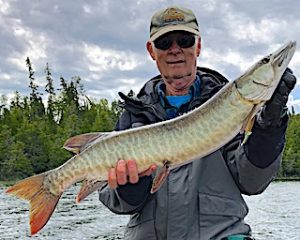 3rd day they again had success Muskie fishing with Don hooking up on two and one was on a figure eight during the 8th pass. The fish hit hard but Don was not able to get a good hook set, and the Musky threw his lure after a brief fight. Al without even fishing for Smallmouth Bass somehow came up with 2-trophy size Smallmouth Bass measuring 19 and 18.5-inches. 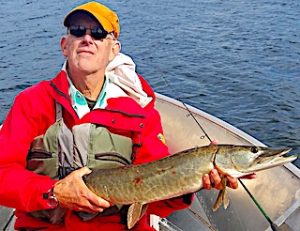 GREAT Muskie Fishing at Fireside Lodge in Canada by Don

4th day was another very good day Muskie fishing getting a lot of follows and both Don and Al hooked up and landed two in the 30-34-inch range and caught some Northern Pike. 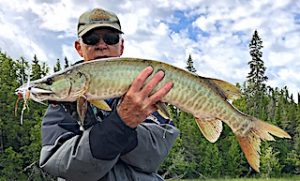 5th day had them catching another Muskie, a 34-inch Northern Pike along with other Pike. 6th and final day they almost doubled their Muskie catch for the week catching four, losing one and having many follows. Totals for the week were 10 Muskie caught, 5 lost, 50+ follows and had incidental catches of 32 Smallmouth Bass and 46 Northern Pike. This was a great week for them and before leaving Al said he hoped to return for his 20th time in 2020. 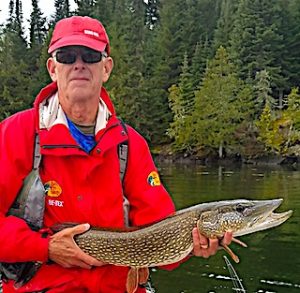 Many Northern Pike Fishing for Muskie in Ontario Canada by Don

Long time guests Joe and Marilyn Foos from Apharetta, GA were glad to be back searching out those big trophy Smallmouth Bass. Day of arrival they did well catching some very large Smallmouth Bass. Marilynn said it was Joe that had the hot hand at the beginning of the day and she had some catching up to do. 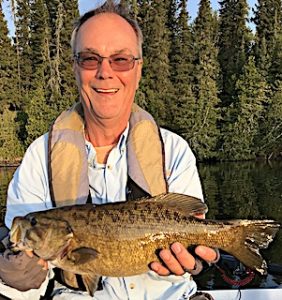 1st day was very good with Joe starting out very strong catching most of the fish but by mid-day Marilynn made a big comeback catching her fair share of the larger Smallmouth Bass. Second day started out in the early morning before breakfast catching some nice Smallmouth on the surface, and for the balance of the day Marilynn had a strong day inching her was closer to catching up with Joe. They love the Smallmouth Bass fishing concentrating their efforts targeting them with mostly surface techniques catching some of the largest Bass this way. 3rd day they had waves of activity amounting to another good day. 4th day started with heavy rains but then by noon things shaped up weather wise and they had a good day catching Smallmouth Bass and a few of those Pike that tend to steal their good Smallmouth Bass lures. 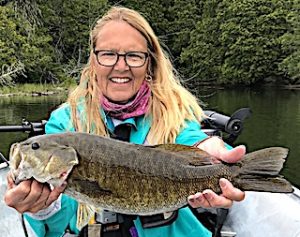 Day 5 was very windy making them fish places they normally would not, but still caught a dozen Smallmouth Bass and two Northern Pike. While using surface lures a Smallmouth Bass first hit Joe’s lure, then went after Marilynn’s and then back after Joe’s, with Joe finally catching the Bass. 6th Day they did well catching 9 nice Smallmouth Bass and 3 Pike working surface lures on a very windy day. Joe said they probably could have caught more fish using another technique but they love using top-water lures. 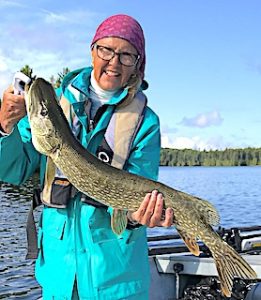 7th day was surprisingly good thinking that a cold front would have slowed down the Smallmouth Bass bite but it did not. They had a lot of action on surface lures even though it was windy again and had very cool temperatures. 8th and final day was slow until 10AM and then all heck broke loose and catching Smallmouth Bass on Surface lures and it never stopped until about 3PM. What a great finish to a wonderful fishing vacation for Marilynn and Joe. 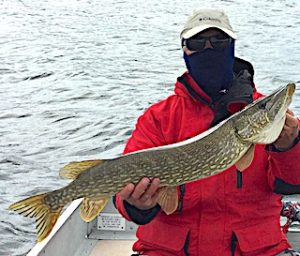 Al The Masked Fishing for BIG Northern Pike in Canada

Al Fishhaber from Northfield, OH and Rob Delamatre from Sandusky, OH have been fishing with us at Fireside Lodge for over 25-years. These two had a great day catching Northern Pike, only a few fish in each spot, but by having knowledge of fishing Little Vermilion Lake for many years and moving a lot enabled them to catch many fish. 2nd day was very good fishing but Rob had a special pre storm happening. This was a text book catch as thunder was being heard far away in the background the fishing was really active and then Rob tied into a HUGE FAT 42-inch Muskie landing it after a spectacular fight. After all the activity of a big catch calmed down they realized that the approaching storm was getting closer and called it a day getting back in time to watch the T-Storms undercover at the Lodge. 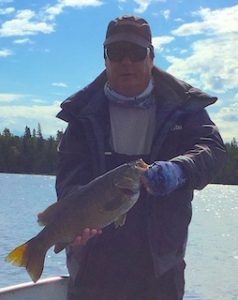 3rd day had them catching many average to medium size Northern Pike. 4th day was 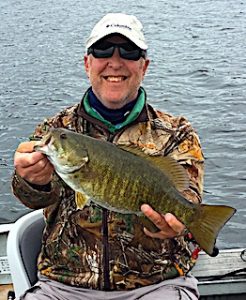 very windy catching a mix of Smallmouth Bass and bigger Northern Pike. 5th day they both caught huge Trophy Smallmouth Bass, Al with a 19-inch and Rob’s hit the 21-inch mark. Not bad for a couple of Muskie and Northern Pike fishers. 6th and final day Rob and AL caught many Northern Pike in the 30-inch plus range before coming in to pack at about 2:30pm. Rob said when fishing out on Little Vermilion Lake and embracing Mother Nature it is the only place he forgets about all the stressful things that tend to occur during his daily life. Both left with smiles already planning their 26th year fishing at Fireside Lodge in 2020. 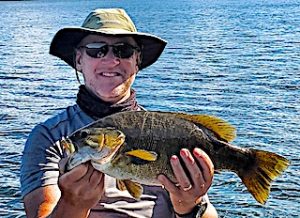 David Sowatsky from Dallas, TX returned for his 3rd time with his son Kyle for his second visit. First day they got a great start catching Many Northern Pike and 29 nice size Smallmouth Bass. 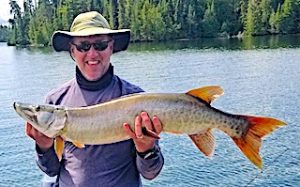 By the end of their second day, which was fabulous fishing, Kyle said they had caught 41 Smallmouth Bass, 32 Northern Pike, and three Muskie. The catch of the day was when David tied into a BIG Muskie and after a great fight landed a 40 inch very heavy Muskie. 3rd day they attempted a portage lake but got blown off the lake because of high winds. While fishing the bigger lake they caught Northern Pike and Smallmouth Bass each catching the largest Smallmouth of their lives.

Kyle caught a huge 19-inch Master Anglers Award Trophy Smallmouth Bass and David landed a Massive Trophy Smallmouth Bass measuring 19.25-inches that was so wide in girth it looked distorted. 4th and final day they had a great finish catching both Northern Pike and Smallmouth Bass looking to catching their 4th Muskie in 4 days of fishing but that goal eluded them. They departed saying their fishing was terrific, service was great leaving with lifelong father and son memories. 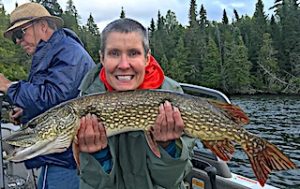 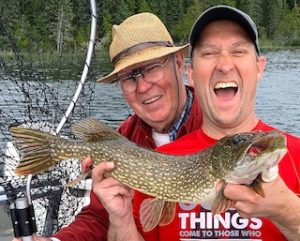 The Borowski Family of Ray, Catherine, and Steve arrived thrilled to be back fishing at Fireside Lodge on Little Vermilion Lake. 1st day fishing they were greeted with strong winds catching some fish, but it was a challenge to fish in certain locations. 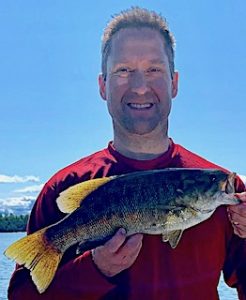 Second day was much better catching Smallmouth Bass and Northern Pike and Steve landed the fish of the day being an 18.25-inch Master Anglers Award Trophy Smallmouth Bass. 3rd day was a great day fishing catching many Northern Pike, a lot being over 30-inches, and Catherine caught the largest of the day at 33-inches. They also had a fun shore-lunch visiting Twin Falls. It was a cool day only reaching a high of 61 degrees so cooking over an open fire not only tasted good but also felt good. 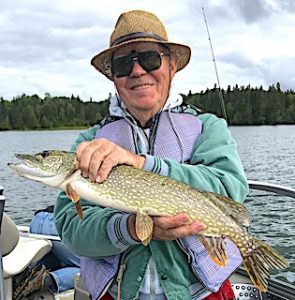 4th day was very good catching many Northern Pike in the 28 to 33-inch range, and Ray lost a BIG Northern Pike right at boat-side. For Ray that moment was a little disappointing but said fishing with his daughter and son is the biggest catch he can ever have. 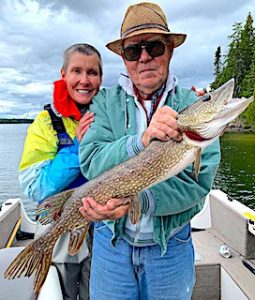 5th and final day we discussed some spots to increase their odds of catching a trophy Muskie or Northern Pike. Well, not for lack of trying they did not hook up with Mr. BIG Musky / Pike but caught a bunch more nice size Northern Pike while enjoying a picture perfect day. All left having a wonderful time making family fishing memories during another traditional Borowski Family fishing vacation. 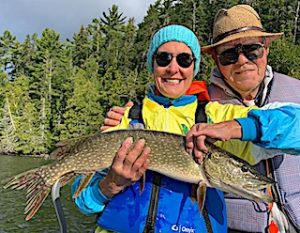 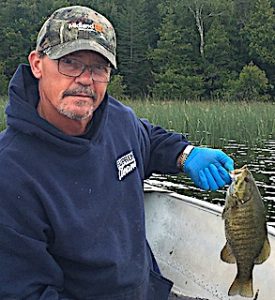 Dave Henry with son Jacob from St Charles, and Bloomington, IL with brother-in-law Bob Mezo from Dixon, Il were back for their 9th time, and joining them for the first time was friend John Lindsey from Atlanta, GA. DOA they targeted Muskie and ended up catching 4 and had many follows. 1st day was super fishing for Northern Pike catching most fish between 26 to 31-inches all being very hefty, and by the end of the day their total group catch was 76 Northern Pike and several Smallmouth Bass, plus Dave landed a HUGE Trophy Smallmouth Bass measuring 19-inches. 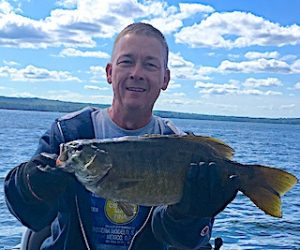 2nd day Jacob and Bob fishing together had some great success catching bigger Northern Pike while David and John caught Northern Pike while searching for a Muskie. John had never caught a Muskie before so their goal was to accomplish this by days end, which did not happen. 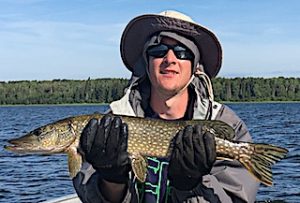 3rd and final day they had a terrific numbers day catching 61 Northern Pike and all left smiling saying that can’t wait until next year. 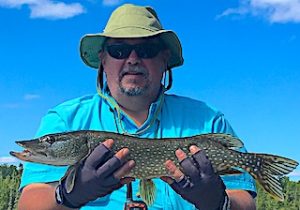 Make sure to go to our website below to see some GREAT Fish Photos. For Fabulous Fishing Video, Wildlife Events, and Current Happenings go to our Social Sites Below. 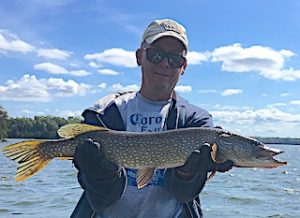 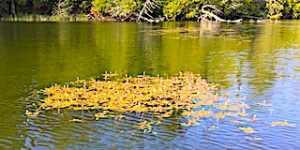 Well, that’s it for this weeks Fireside Lodge Fishing News Report, Please stay tuned for next weeks report. Until then “Keep On Fish’n” Alan