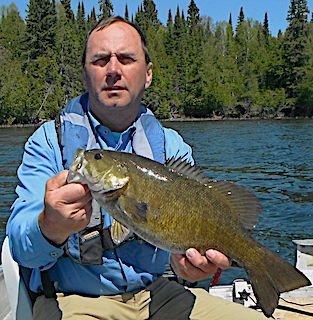 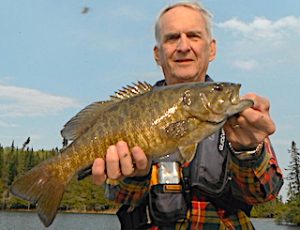 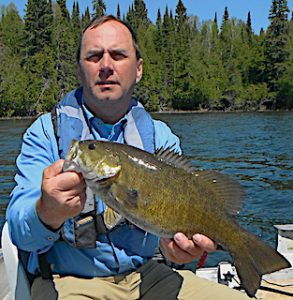 Weather was on the cool side but terrific with most days being sunny or partly cloudy with a slight wind. With the fishers high anticipation of opening week after a long winter excitement was in the air. 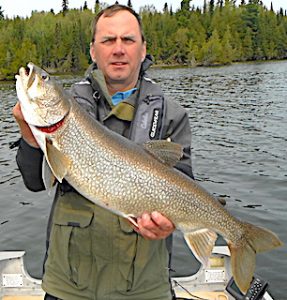 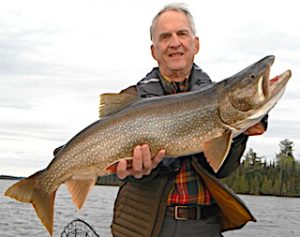 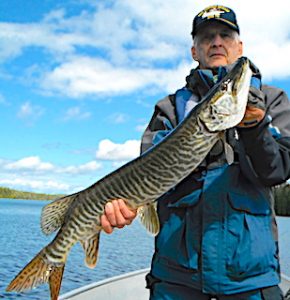 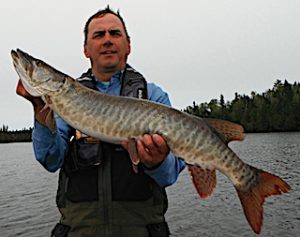 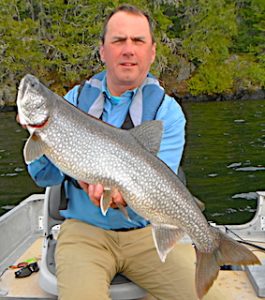 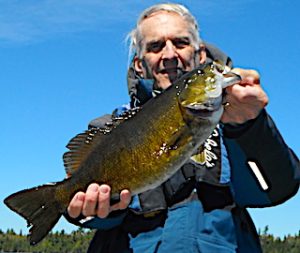 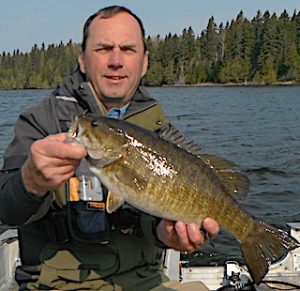 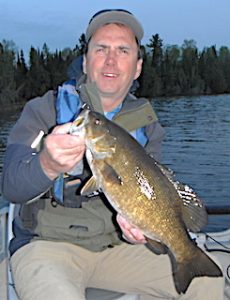 These two are always in the hunt for BIG Northern Pike with Tim catching his best ever last fall being a 48-inch Monster. They use multiple methods of casting and trolling to a do-nothing approach, which enhances their success rate on catching other species like Smallmouth Bass, while searching for the ultimate Trophy Northern Pike. Most days were very successful catching many Northern Pike and bumping into a Muskie or Lake Trout while trolling. Four of the Lake Trout were trophy size with a huge girth measuring 34-inches or larger. They also had great fishing for Large Smallmouth Bass catching 25 to 30 in short periods of time measuring 16 to 19.5-inches with seven qualifying for our Mater Anglers Trophy Award. 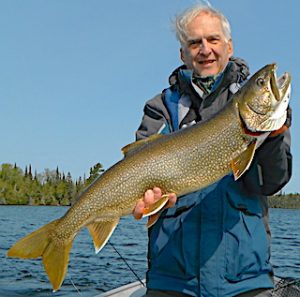 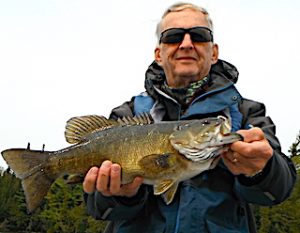 Most of the Smallmouth Bass were caught on hair or marabou jigs with a very slow or do-nothing presentation while at times they hit a white spinner bait. The majority of the Northern Pike and other toothy critters were caught are larger spinner baits, one being their favorite Rad Dog, or an X-Rap and Husk Jerk. These two have spent many opening weeks with us, enjoying it in their 17th year as much, if not more than their first. 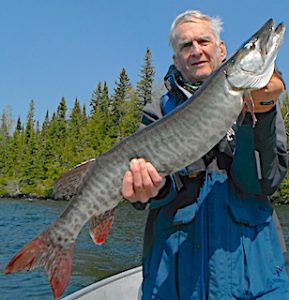 We enjoy having them equally as well, always-creating good conversation and laughter in the dinning room. We hope to see them for their 18th year for our opening week in 2020. 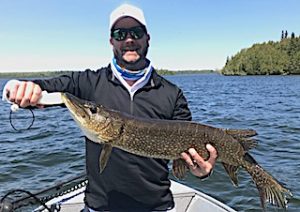 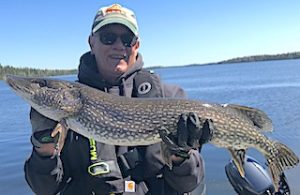 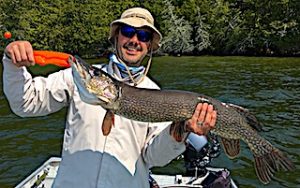 Long time return Guest Paul Letourneau from North Oaks, MN returned for his 2nd trip this year coming with son Michael from Metairie, LA who has been coming to Fireside Lodge with his dad since he was 16, and now he is 34. Also returning was Paul’s nephew, Michael’s cousin, Nick from Maple Grove, MN. 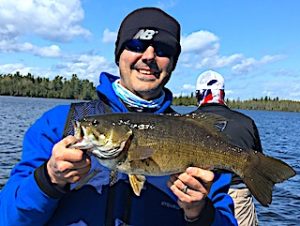 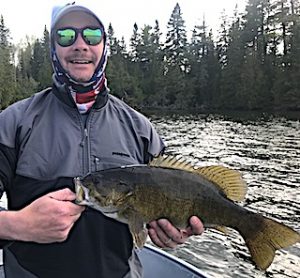 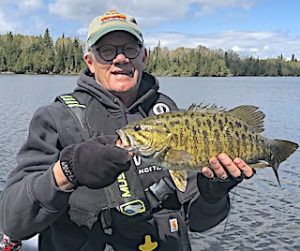 These three returned together after being here just 7 months ago and picked up where they left off. These three seem to be fish magnets, maybe their long tenure helping, as on their day of arrival the caught 8 nice Northern Pike and an equal number of large Smallmouth Bass. 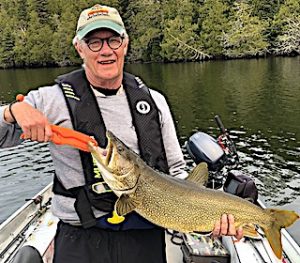 The next few days were full of action catching Many Northern Pike and Smallmouth Bass with Paul landing two Master Anglers Award Trophy Smallmouth Bass, Nick with one, and they all caught many other Smallmouth 16-18-inches. Northern Pike were sizable catching them in the 30-36-inch range, several Muskie were caught with Paul catching a HUGE 45-inch Trophy Musky. The story behind this catch was Michael and Nick were casting while Paul was slow trolling behind the boat. Michael had the Muskie follow his lure when it quickly turn away heading towards the back of the boat and hit Paul’s slow trolling lure. Michael also netted the Musky so he gets a BIG assist and then deliberations were underway if we should cut the Master Anglers patch in half. 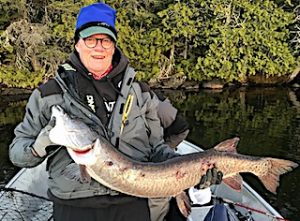 Trophy Muskie Fishing by Paul at Fireside Lodge in Canada

Their third day was good fishing finding an area where many very big Pike were hanging out but despite a lot of effort their only results were follows. Nick had to depart on midweek to attend an event for his son so Michael and Paul finished out the last two days catching some larger, 30-36-inch Northern Pike and many BIG Smallmouth Bass including 5 Master Anglers Award Smallmouth Bass on their final day. 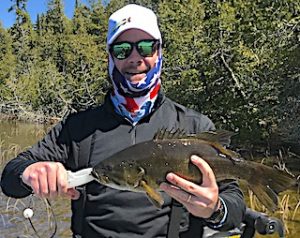 All had a fabulous time making many family fishing memories once again. We look forward to seeing Paul again as he will be returning to fish with us again in August. 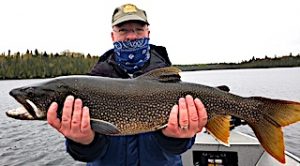 Fifth time returning were Mike Chykta from Port Orchard, WA, Resit Unal & Nick Christner from Yorktown & Barhamsville, VA. They all had another wonderful fishing trip getting the cool weather they missed in 2018. Every morning these three were out by 5AM with the exception of one day when the temperature in the morning was 26F, and fishing every day after supper until 9PM. They were successful every day catching fish before breakfast starting their day off with some fish under their belt. 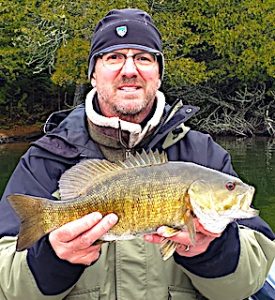 The rest of the day on the water they found success catching Northern Pike, Smallmouth Bass, and some Lake Trout having one day where the action and catch rate was far and above the others. Seemed like their go to lures were a Blue Fox Spinner, and a Rapala X-Rap or Husky Jerk. All managed to catch BIG Smallmouth Bass and each landed a big Lake Trout. More importantly the fun and laughter were constant all leaving with another set of fishing memories between friends at Fireside Lodge. Thanks for being here a as they were leaving said their hopeful to return in the near future. 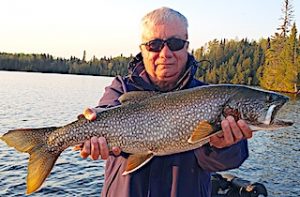 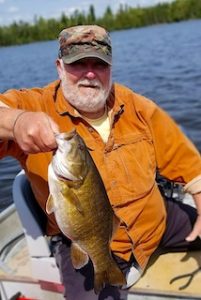 Long time guests Ken & Sandra Beta from Fox Lake, IL., 1st time Ken fished here was 1970, was thrilled to be back again to continue nearly 50 years of making memories fishing in the Canadian Wilderness of Northwest Ontario. His consecutive year strike was broken last year for the first time so Ken was really looking forward to this year’s trip. Here for a short three days they made the most of it and the weather cooperated. First day had them catching a mix of Northern Pike, Smallmouth Bass, and Sandy caught two-surprise Lake Trout. In fact Sandy was tops for the day catching most of the Northern Pike. Second day Ken caught several bigger fish and then they hit a hot spot 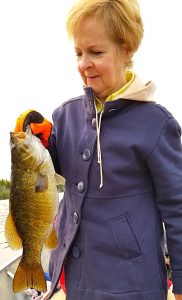 of many BIG Smallmouth Bass. Conditions were perfect as they found these pre spawn staging Smallmouth right in the reeds, and being a very calm day they were able to toss sinking worms, wacky style, right into the reeds and all heck broke loose. They ended up landing 30 plus big Smallies ranging from 16 to 20-inches. They caught 5 trophy Master Anglers Award Smallmouth including 2 measuring 20-inches, one at 19.5-inches, one at 19-inches and an 18.5-incher. In the same area Ken also landed two big Lake Trout. What a FABULOUS day of fishing. In fact Ken said it was his single best day of fishing for Smallmouth Bass ever. Their 3rd and final day brought another three trophy Smallmouth Bass between 18-19-inches and good Northern Pike fishing. Sandy and Ken went home having a great time and Ken was talking about returning in August with his brother.

Make sure to go to our website below to see some GREAT Fish Photos. For Fabulous Fishing Video, Wildlife Events, and Current Happenings go to our Social Sites Below. 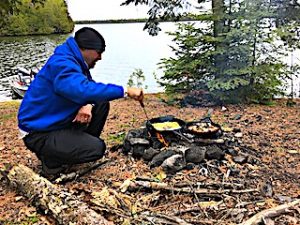 Shore Lunch is Delicious at Fireside Lodge in Ontario Canada 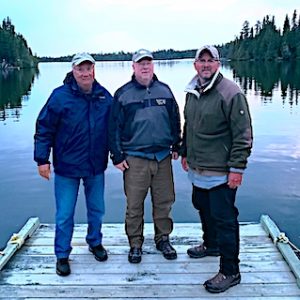